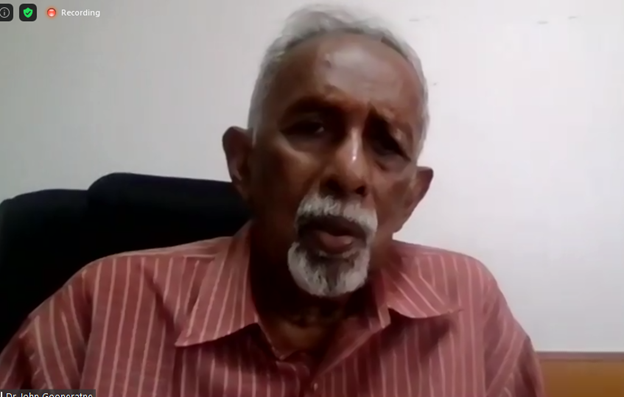 BCIS’ ‘Historical Narratives in Diplomacy- Being There,’ entitled “On Diplomatic Postings, We Sometimes Bump into Crises that Didn’t Exist Before,” narrated by Ambassador Dr John Gooneratne, was held online on Saturday, July 17, 2021 from 12.00 noon to 1.30 p.m.

“Historical Narratives in Diplomacy- Being There,” provides a platform for sharing experience of eminent experts with emerging generations of professionals in the field of International Relations. This is an informal space for acquiring first hand anecdotes and tactical insights from experts in their historical/professional settings.

A brief documentary that captured a glimpse of the International Relations and Governance related contexts that our guest speaker Ambassador Dr John Gooneratne has served in during his span of career in his missions abroad and in influential positions in Sri Lanka was screened.

Ambassador Dr John Gooneratne, an Alumnus of University of Peradeniya, American University of Washington DC and the University of Colombo, joined the Foreign Service in 1961. He served in Washington, Myanmar (Burma), Cairo, New York and was appointed Ambassador to Iraq during the period 1989 – 1992. This was when the first Gulf War began on August 28, 1990 with Iraq’s invasion of Kuwait.

The Webinar was attended by around 198 vibrant participants including some members from the diplomatic community, present and former foreign service officials, parliamentarians, academics, other professionals, some members of the BCIS’ Council of Management and BCIS’ Academic Board, and students.